What does it take for a young person to turn away from “death dealing ways” and “choose life” instead?

In the summer of 1996 a young man found himself standing in a courtroom, holding a 4-page letter he had written in pencil to read to the juvenile court magistrate. In the months prior, he had stolen a car, gotten in numerous fights, done a lot of drugs and cut off an ankle monitor to flee probation. In his letter, Jerry described his life and the choices he had made to lead up to this point. He went on to say he had found a school community he was willing to try, to turn his life around. “Don’t send me to prison,” he pleaded, “Send me to Eagle Rock … I can choose my future from here.” The judge listened and granted his wish.

2 years later Jerry found himself standing on a stage in a gym, accepting his high school diploma, with feelings of pride, accomplishment and purpose, and a sense of hope. He had reestablished a relationship with his parents. He had discovered a gifted artist within himself, capable of painting stunning murals and bringing beauty into the world. He had found a moral compass within himself as well, able to discern right action from harmful action, and the will to act on what he discerned. He had found his way. He had chosen life. https://mobile.nytimes.com/1998/07/05/magazine/the-high-school-at-the-end-of-the-road.html?referer=http://eaglerockschool.org/about-us/history/

For every “Jerry,” there are countless more. Some like Jerry find their way; others don’t. And in losing their way, they literally lose their lives and take others with them. In our city of Baltimore as of today, there are 200 homicides on record for 2017, most of them from gun violence, and 34 in the last 30 days http://data.baltimoresun.com/news/police/homicides/.

As Baltimoreans and as Christians, followers of “The Way”, we ourselves have a choice before us. Do nothing? Accept this as “just the way it is”? Or do something … 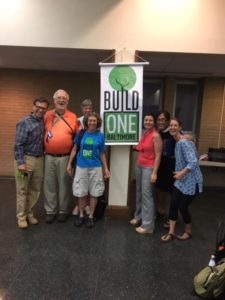 Next Wednesday August 2, Baltimoreans United in Leadership Development will gather at 6 p.m. in Darley Park at 2300 Harford Road. There, BUILD will hold a press conference to launch a campaign of action and call upon our mayor to work together with BUILD and our city’s public officials, to address Baltimore’s epidemic of violence with real and specific action steps. A group of us will be participating from Redeemer.

Will you join us?

Saturdays:
5:00 p.m.: Faith@Five, Contemporary worship in the south transept of the church

Keep up to date with our weekly newsletter: