Welcome to that great, green, growing season — Ordinary Time! We have arrived in the season after Pentecost, one in which we get to stretch and grow and wonder and wander through stories about Jesus and the disciples and the adventures of the people of Israel with God. I love Ordinary Time. It’s spacious. We aren’t preparing special liturgies for any quickly approaching feast, or working up specific programs based on said feast. We’re existing: swimming around through the sounds of the cicadas and God’s Word.

We are entering another season, too. The beginning of June marks the beginning of Pride Month (referring to Gay Pride). Happy Pride!! To our LGBTQIA+ siblings: You are fearfully and wonderfully made in the image of God, a beloved member of the Body of Christ, always. In celebration of the LGBTQIA+ histories that are part of our Episcopal and Christian story, below is a little bit of history about a Baltimore native, who we also happen to remember at the end of June or beginning of July: The Reverend Dr. Pauli Murray. 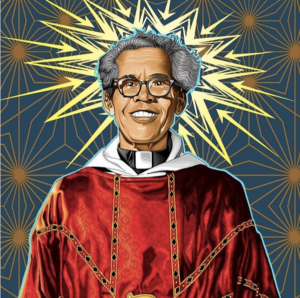 Pauli Murray was a queer Episcopal priest, civil rights activist, lawyer, and writer of poetry and prose. She was born in Baltimore (!) in 1910 but went to live with family in Durham, North Carolina at a young age. Pauli studied English literature in college. During her young adulthood Pauli wrestled with gender identity. She sought hormone therapy during the 1930s but was denied by doctors. Pauli favored “masculine-of-center” gender performance, and while today she might have identified as gender non-conforming or as a transgender man, that kind of terminology was not available to her in the 1930s and 40s. (I’m using she/her pronouns in this reflection because that is how Pauli often referred to herself.) While Pauli was not closeted and had romantic partnerships with women throughout her life, she also had to navigate the respectability politics of her time period.

Active in the movement for civil rights, in 1938 Pauli campaigned to attend law school at the University of North Carolina, Chapel Hill, but was denied because of race. She was arrested and imprisoned for refusing to move to the back of the bus in 1940; in 1941 she began law school at Howard University, focusing on civil rights law. During this time, Pauli’s writing (poetry and prose) was widely published. Although she graduated top of her class from Howard, she was denied entry to Harvard Law, this time because of her gender. Pauli attended the University of California Boalt School of Law instead and later published a book that supplied some of the ideas and arguments used during Brown v Board of Education. Pauli fought throughout her career for equal rights for people of color and women, and eventually went to work at a law firm where she met her partner, Irene Barlow, in 1956.

Pauli remained engaged in the civil rights movement, including critiquing it for the ways that men made up most of the leadership while women did much of the ground work. After Irene’s death in 1973, Pauli became a candidate for ordination to the priesthood at General Theological Seminary in New York City (which is where Cristina and David went!). In 1977, Pauli Murray became the first Black woman ordained a priest in the Episcopal Church, one year after the Church changed its policy to affirm the ordination of women. Pauli died of cancer in 1985; she was made a saint in the Episcopal Church in 2012.

Pauli’s history is part of our church’s history. Her story is another story to wonder and wander through this Ordinary Time, another beloved child of God’s adventure with God. I wonder what other stories you will discover during our green and growing season? How will you stretch into God’s story with you? Into God’s story with the world? I pray that we may celebrate one another in all our beautiful particularities, this June and in the months to come.

P.S. If you’d like to read more about Pauli Murray, I commend to you this biography from the Pauli Murray Center or this article by Professor Brittany Cooper of Rutgers. Professor Cooper also advised on an upcoming documentary about Pauli, My Name is Pauli Murray.

Keep up to date with our weekly newsletter: